According to the antique traditional recipe of Spilinga, the pork meat (jowls, belly and a minimum part of lard, to make the texture velvety) is minced together with sweet and hot sun-dried chilli peppers. The mixture, once salted, is stuffed in natural casings (the pork’s caecum intestine, or Orba), smoked and cured for two months. Thanks to the antioxidant properties of peppers, the ‘Nduja contains no preservatives nor additives. It is all natural.

The closed-loop traditional production chain – from the production on the farm of high quality pig feed (only corn), to the rearing and butchering of the pigs, from the cultivation, sun-dehydration and mincing of the peppers, both the sweet and hot variety, to the production and curing – guarantees the quality of this specialty of the traditional Calabrian cusine.

The ‘Nduja Primitiae Italiae is produced by a family-run organic farm in Spilinga (the town where the recipe was originated) according to the guidelines set by the Consorzio Produttori di ‘Nduja di Spilinga. 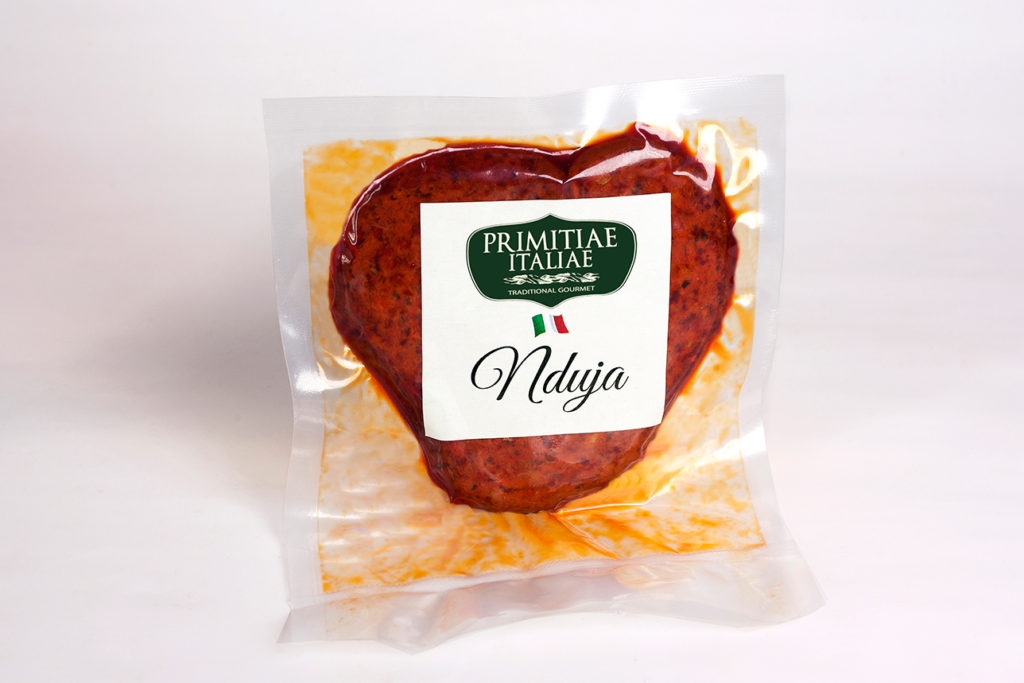 The Primitiae Italie ‘Nduja will engage all your senses, with its delightful spiciness, its velvety texture, its rubin colour, and its distinct and slightly smoky aroma. Don’t miss the opportunity of a unique sensory experience!

Simply spread on toasted warm bread, ‘Nduja will surprise you with a spicy, smoky and delicious flavour, perfect also to garnish pizzas or to create tasty savoury cake fillings.

Divine to prepare pasta sauces, it adds a special taste to stir-fried veggies together with oil, garlic or onion.

Perfect to accompany semi-seasoned cheeses, it softens its spiciness if combined with fresh and creamy ones, such as ricotta or goat cheese.

Chicken rolls with a heart of ‘Nduja and Asiago cheese

For more information on this and other products Primitiae Italiae, please fill out the form below